You may not be able to cuddle a fish. But that doesn’t deter the city’s many aquarium enthusiasts. So many, in fact, that Kolathur has grown into a hub for this hobby — not just for India, but Southeast Asia as well. Keeping fish may seem simple, but it is a hobby that must be approached responsibly. To do that, professionally-run public aquariums are essential. Now, Chennai finally has one that is of international standards in terms of display and stocking parameters.

The Chennai Public Aquarium at Chetpet Eco Park is India’s first World Biotope and Chennai’s first public aquarium. It features various biotopes of the world, each containing within it a recreation of that region’s exact natural habitat and fish. Each is accompanied by digital info displays. This is a Public-Private-Partnership initiated by the Tamil Nadu Fisheries Development Corporation (TNFDC) with Aquasstar. 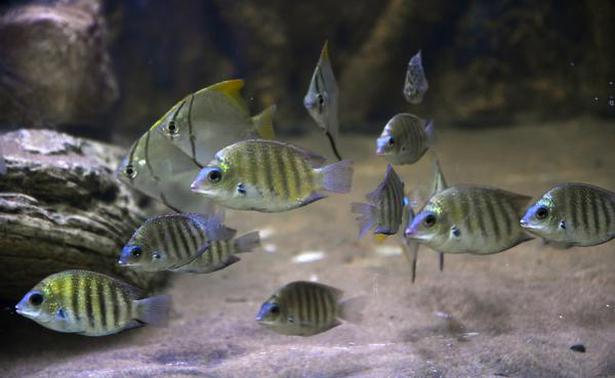 Sam Solomon, a key resource person for this project, lists some of the species from across the world that Chennaiites will get to see here. The South American biotope, he says, includes rare specimens such as the peacock bass, talking catfish, freshwater stingray and leporinus stratus. The Central American one features salvinis, red devils and firemouths, among others. The African one has the “very rare” giraffe catfish, the upside-down catfish and the peacock chichlid to name a few. Inhabitants of the Southeast Asian biotope include rainbow shark, tiger barb and the rare odessa barb, while the Australian one houses eight rare varieties of the Australian rainbowfish.

Other rare specimens from around the globe

He says that having fish has been his passion since he was in school, adding, “We hope those who come to this aquarium will learn to become more responsible towards aquatic life. The rate of extinction of species under water is much more rapid than over land, wildlife under water is threatened not just by pollution and habitat loss but also the release of non-native species that rapidly over breed and kill native stocks.”

He adds, “The hope is to quickly have smaller tanks that focus on the little gems of fish and invertebrates found in Indian waters and have posters and interactive events. The Government gave us a free hand once they realised that we were passionate and competent and were eager to repay that trust and get others as interested in this as we are. Perhaps we will eventually even do fish study trips to biotopes within the State. Anything is possible!”